or rather: there is never room in the lifeboats for everyone

Getting on board the famous ocean liner to live from inside the actions, the dynamics, the questions arising from the agony and the sinking of a world:
Who is saved and who is submerged?
At what price are we saved?
What is the iceberg that hit us?

Il Violino del Titanic, on stage since 2013, reproduces the immersive experience of the shipwreck: the spectators are in direct contact with the more than 30 actors on stage (Italians, migrants, asylum seekers and refugees) and move with them in a constantly changing scenario.

Enzensberger: the sinking of the Titanic as an investigation of the crisis

The show is inspired by the poem The end of Titanic, by the German poet and intellectual Hans Magnus Enzensberger, in which the story of the famous ocean liner unravels, with the usual complexity of points of view and levels of interpretation, some issues that have always been at the heart of his thinking: the dialectic between progress and catastrophe, the gradual, almost imperceptible drip with which the end of the world occurs, the collapse of utopias, the role of the poet and the intellectual.

The sinking that the show tries to investigate is, of course, the crisis not only economic but also cultural and social that our world is going through. Using the elements and categories belonging to the story of the Titanic (for example, first class and third class, icebergs, submerged and saved, lifeboats) for several months we conducted interviews and asked dozens and dozens of people for writing contributions, so as to accumulate the most diverse views on issues such as victims of the crisis, who is saved and who succumbs, what are the icebergs that have hit our world, what role culture can play in saving, what contribution can be made by those who come from other worlds to the attempts of ours to stay afloat.

At the same time the group of cartoonists Expris Comics was asked to visually confront the same issues, creating a logbook for comics and videos hosted by the site ilgirovago.com, merged in the publication Come il Titanic (Ed. Nuova S1, 2014).

The show was created as part of the international project Acting Diversity, in partnership with Compagnia Teatro dell'Argine, Al-Harah Theater and Badac Theatre Company, with the support of Anna Lindh Foundation. 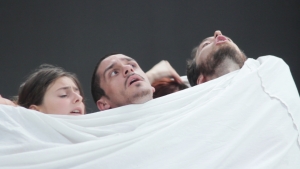